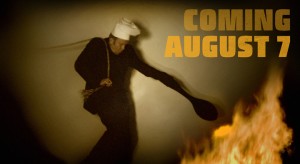 Now we are not the only ones responsible for making this mess,
Got their sorry asses stapled to a goddamn desk,
And hell broke Luce,
Hell broke Luce,

Left, right, left,
What did you do before the war,
I was a chef, I was a chef,
And what was the name it was Jeff, Jeff
I lost a buddy in Iraq, raq
I come down from the meth,
So I slept, slept,
I had a good home but I left, left,

Pants to the wind for a joke,
I passed right in with a goat,
Glanced at her shins she said nope, hope,
Left, right, left,
Nimrod Bobfish have you any wool,
Get me another body bag, the body bag’s full,
My face was scars, scars,
I miss my home, I miss my porch, porch,
Left, right, left,

Boom went his head away and boom went Bowery,
What the hell was it that the president said?
Give them all a beautiful parade instead,
And left, right, left,
Well I was over here, America, to cope,
I left my arm in my coat,
My mum she died in a rote,
Set by the fire in her coat,
Just before he died he had a toke,
Now I’m home,
And I’m blind,
And I’m broke,
What is next?