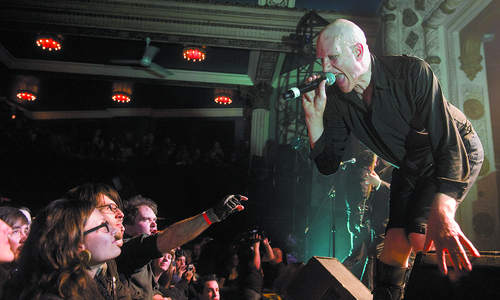 Wax Trax Records long gone, but pulse of its music is strong

As important as Chess Records was to blues and soul music, Chicago’s Wax Trax imprint was just as significant to the punk rock, new wave and industrial genres. What began as a record shop on Lincoln Avenue that specialized in underground music more than 30 years ago morphed into an influential label and seeped into the city’s culture. Even after the label went bankrupt, the storefront closed and founders Jim Nash and Dannie Flesher passed away, the music and reach of Wax Trax Records never dissipated.

This is why the Metro was sold out Friday for night one of the three-night stand celebrating the legendary label. Practically the Wax Trax festival that never was, “Wax Trax Retrospectacle: 33 1/3 Anniversary,” brought together some of the label’s pioneering industrial bands such as Front 242 and My Life With The Thrill Kill Kult, and also featured tributes to even more well-known acts such as KMFDM and The Revolting Cocks.

Friday night began with a taste of more punk-fueled side of Wax Trax as Rights Of The Accused set the pace with their chugging, near-metallic riffs. Though the band has aged somewhat from their heyday in the mid-’80s, that hasn’t slowed down their lightning guitar licks or dulled their sense of humor.

Front man Michael O’Connell, who donned the rock ’n’ roll mainstay of tight leather pants and even a disco ball belt buckle, took the time to intersperse the band’s set with humorous anecdotes from Wax Trax’s past including one about when an unknowing Nash commented how Black Flag sounded like Jethro Tull in front of Henry Rollins.

Afterward, the mood became decidedly darker as songs from German industrial outfit KMFDM were performed by former members including vocalist and guitarist En Esch, guitarist Günter Schulz and British vocalist Raymond Watts and German vocalist Mona Mur. The group pummeled the club with menacing guitars that nearly drowned out Esch’s demonic growl, but the crowd was simply concerned with having enough room to fist pump. The scene turned especially rowdy when the opening synth gurgle of “Juke Joint Jezebel” blasted over the speakers, and a mosh pit formed in front of the stage. By the end of the set, it was this near-violent energy that seemed to push the band and even bring them out for a seemingly unplanned encore.

Belgian industrial group Front 242 closed out the night with their crooked synth lines and dizzying strobe lights. After opening with a long dramatic introduction that featured the United States constitution scrolling on a large video screen behind them, they launched into the sexually aggressive anthem “Body to Body.”

While the band danced and sang the song’s hooky chorus, it unfortunately didn’t match the heavy riffs that powered the night’s earlier acts.

If night one of the Wax Trax Retrospectacle proved anything, it’s that while the bands and fans might have a few additional gray hairs, the music the label birthed is timeless.

only a few survived.